A couple of weeks ago by now I finally got to visit our new office in the Vechtclub XL building in Utrecht. This turned out to be a great experience. 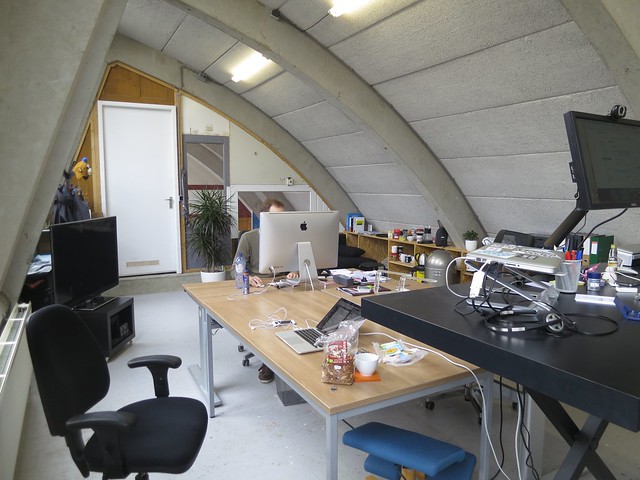 One of the best aspects of the ‘club’ is that it offers an alternative to Utrecht’s terribly cramped and overpriced city center. Everybody wants to live and work in the Utrecht within the ‘singels’ but that privilege costs a lot of money and doesn’t give you a lot of quality of life. Only if you manage to strike a suitable property deal with the city you can do whatever the fuck you want. 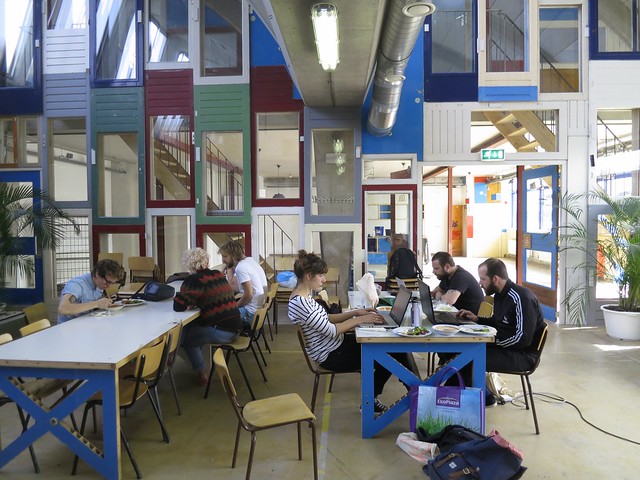 The Vechtclub XL is a fifteen minutes bike ride out of the city on a derelict business park, about here. There’s nearly nothing nearby which means the building needs to be self-sustaining. That necessity is actually causing that to happen. They are setting up a fully functional cafetaria with world class coffee and more facilities. Being there right now is not terrible. People make do with whatever they have already brought in and there are upsides such as somebody training for a barista championship, lunch being brought in once a week and other events being organized.

This is a continuation of a previous non-XL Vechtclub. Most of it has been funded by the people there who run it not as a cooperative —which looks to be vital. Development is autonomous and moves at a fast clip. The space which is already pretty great is improving continuously.

You can imagine that I was a bit envious and loathe to leave. The upside is that it’ll probably be all new again next time I get there.

I was looking around a bit to see if something similar is happening in Berlin or other places as well.

Adam Greenfield mentioned the Institut for (X) in Aarhus which looks very similar in its setup and goals. In Berlin there is the Alte Gießerei which is being converted into a similar setup. There are a bunch more spaces that do something in that direction but most of them do not manage to hit the scale or communal vibe that I try to describe above.

There is a shack on Tempelhofer Feld that explains the senate’s plans with the park and the construction they plan to do there: 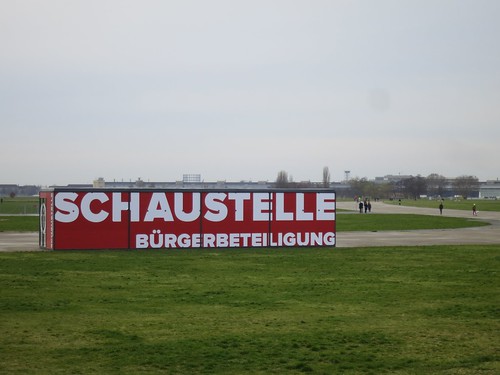 The people of 100% Tempelhofer Feld with an alternate view are not allowed to express their view on the park itself. Reading through their facebook feed for the past weeks is a collection of absurdism that beggars belief. Truth is stranger than fiction.

And now the city has started a campaign where they found people willing to shill for construction on the field in videos such as these:

They don’t mention how much these people have been paid for their participation. Maybe a human flesh search for these people would be a good idea to track them down and ask them what they really think.

Anyway the entire thing is turning into a travesty where capitalism and the corrupt local government get what they want regardless. There is a term for such an unholy alliance though it has fallen slightly out of use in Germany these past decades.

I have been long flummoxed by how terrible the CDU/CSU complex in Germany is. I could not understand how people could be that stupid and that conservative to the detriment of everybody including themselves. The number of examples is near infinite, but this post was prompted by yesterday’s action by the young Union Berlin.

I now have a new working theory that explains this issue and sheds a new light on Germany.

Working theory: Most of the people from the Nazi party who weren’t shot after WWII went into the Union.

I have not really heard anybody object to this and it really does explain a lot. Those people had to go somewhere and I’m guessing they did not enter the socialist parties which were probably seeded from whatever red element survived the world wars.

This fact has shaped modern German politics from then on.

I have followed the Turkish elections on the night from Sunday to Monday which turned into a gripping account of prime minister Erdogan trying to steal the elections while most of the people were sleeping. Orchestrated blackouts had drawn out the count. The twitter block didn’t prevent activism from spreading but did reduce the reach of its effects. Those that knew and cared about it were at the counting locations trying to safeguard the ballots and the tallies.

The tally notes were shared to be able to corroborate them with entries into the online result system. Most of those results have been off, some by a small amount, some by a larger amount.

Altogether it was a mess and from the cross section of tallies I’ve seen it’s hard to believe that the AKP would have fully swept Istanbul and Ankara. What follows now is a long process of chasing the issue into Turkey’s notoriously horrible judicial system. It is unclear whether that will have an effect other than reducing the trust people in Turkey have in institutions even further.

Yesterday I learned unexpectedly but viscerally that democracy is worth defending. It's not the best feeling but I'd still recommend it.

What that night did teach me after the lukewarm Dutch municipal elections is that democracy is an institution worth defending both when things are calm but especially when times are tough. I am finally allowed to participate in a vote in Berlin. The European Parliament elections may be lackluster but I’ll take whatever little democracy I’m given.

I’ll post back here about how that vote and its count goes.

Something else that is noteworthy is the dismal coverage the elections got in the Dutch mainstream media. For any kind of news event that you are interested in, following tweets either in the local language or by English speaking commentators on the ground provides a far better experience. What I saw on Dutch television and in Dutch newspapers was predictable, shallow, disconnected and actively shameful.