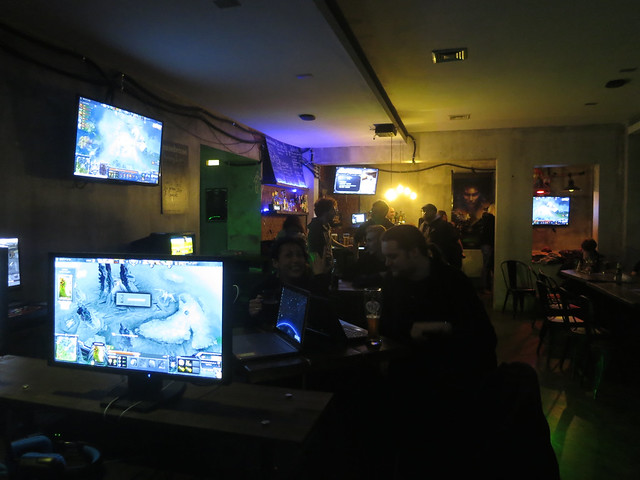 Yesterday I attended the weekly Dota2 night at Meltdown esports bar for the first time. I’m looking for people who I can play with regularly because going out into solo queue is becoming a bit tedious and unpredictable. There is a small crowd of people there who play 5v5’s in a private lobby against the Meltdown London cafe. It’s a lot of shouting and mostly fun.

What strikes me when I go to these get togethers is that however different the people are, there is a shared culture because everybody reads /r/dota2 and watches the same streams and tournaments. It is fairly homogenized everywhere with the exception of China which is insular with its own client, servers and a slew of native language media.

I was also happy to see that the gender balance wasn’t as one-sided as I had feared. There’s still a long way to go but what I saw at the bar makes me optimistic. 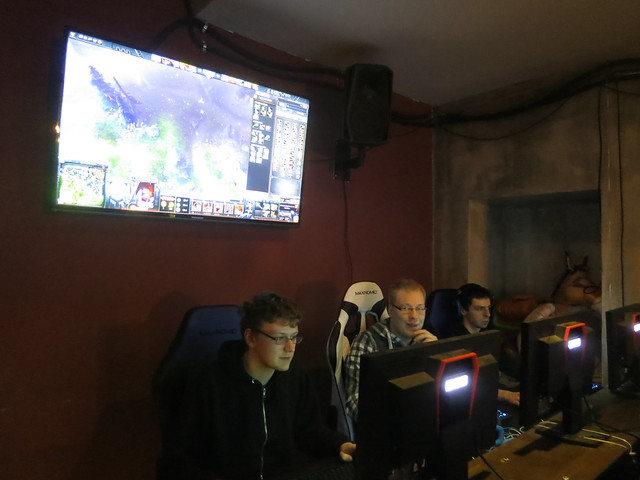 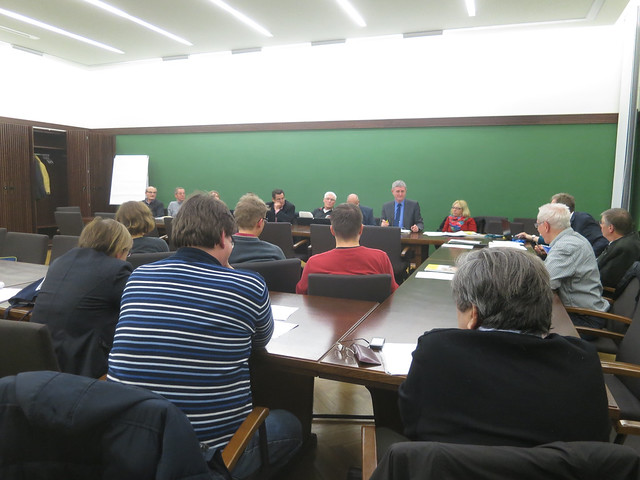 I heard about the session of the traffic commission of Berlin-Neukölln through the great Urbanist Magazine who wrote that cities get the bike paths they deserve and that being present at political sessions is a prerequisite to change things.

So I made my way over to Rathaus Neukölln during rush hour yesterday to listen in on the session. Even though these things are deadly boring, they are at the same time extremely revealing of the workings and attitudes of our governments and just for that fact worthwhile to occasionally visit. At the same time I think it is a civic duty to attend these sessions for the things that you are interested in. If you don’t, others will. The website Berlin.de lists the proceedings of the session but it is unfortunately totally unusable on a mobile device (see the screenshot above) so I went by ear and noted what I could understand of the proceedings. The meeting protocol was I may add a bit chaotic and unclear. Part of it may be because I was ten minutes late (thank BVG) but I would expect local political sessions to at least have signs to show who’s who (like they do in Amsterdam).

Points two to five of the agenda were about improvements for cycling in Neukölln and after some debate all of these points were summarily rejected by the SPD/CDU who have a majority in this part of the city and I gather also chair the commission. For some proposals the chairs took offence and for the others they declared that what was proposed would be of no use. During the vote for each of these points they were rejected.

The debate about point 3 was especially illuminating.

Point 3 was a proposal to research how to keep the bike path on Karl-Marx-Straße free of parked cars. The chair of the committee said that this problem simply cannot be solved. The representative of the police said that they don’t have the capacity to enforce the law when it comes to this matter and that doing so would jeopardize their ability to stop violent crime. Somebody present requested that these people be fined to which the chair replied that that wouldn’t help either because people don’t care about the fines.

The chair cited examples to the contrary from around Schloßstraße and Savignyplatz. These don’t really seem relevant to me. Fines for parking on a bike lane are nearly trivial but not so trivial that they wouldn’t be felt in Neukölln at all.

A couple of people attending protested and said that this was a selective application of the law meant to fuck cyclists. These people were not taken seriously at all by the committee.

It seems that the governing parties in Berlin reject any proposal submitted by the opposition. An opposition who I may add do not seem to be the sharpest knives. Some of the proposed solutions were not realistic in the slightest. One example: replacing the DHL trucks with cargo bikes is batshit crazy. To add to that: DHL trucks parking on the bike lanes are not the biggest problem at all and something that can be solved fairly easily.

I went to this meeting to see why cycling in Berlin is so bad as it is and most of what I thought was confirmed. Berlin does not take cyclists seriously and the governing bodies are populated by people who say they care but who really don’t give a shit. 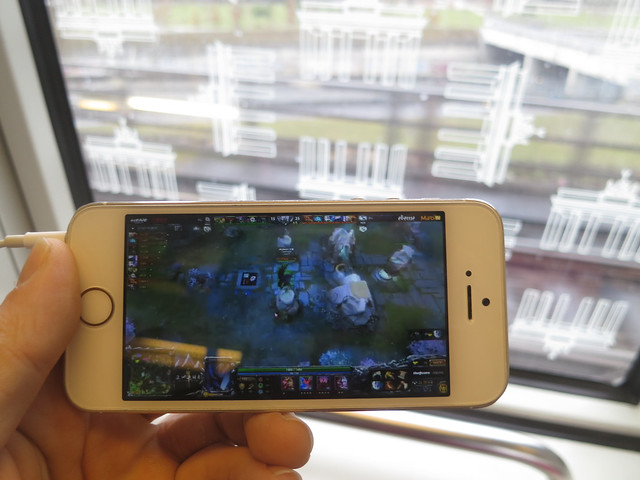 So it turns out that 3G over Blau in Berlin is good enough to watch a Twitch stream of the DAC finals between Evil Geniuses and Vici Gaming and allowed me to watch the amazing Storm Spirit performance by SumaiL in the last match.

The finals started at around 8AM (China Standard Time) and unfortunately were a clean sweep for EG so they were over pretty quickly. Most impressive was the fact that SumaiL, a fifteen year old kid from Pakistan, stole the show. Watch a summary below. 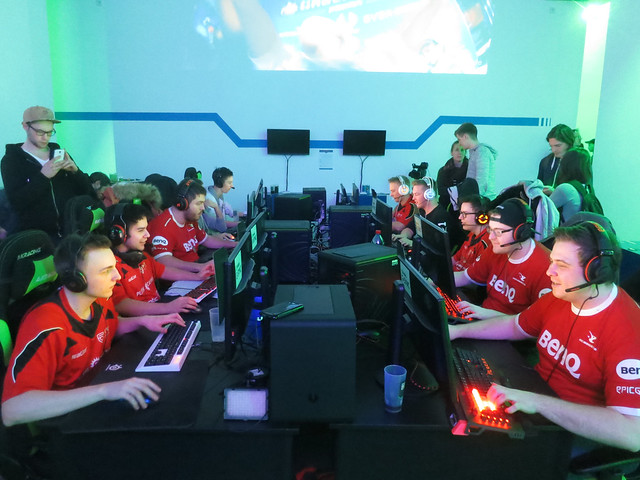 A couple of weeks ago I was invited to attend a NVIDIA sponsored Counter Strike: Global Offensive tournament in association with 99 damage at the Berlin Game Science Center.

CS:GO is an amazing team based sport where five terrorists try to set and explode a bomb on a bomb site (you can see sites A and B marked on the maps) while counter-terrorists try to prevent the bomb placement or defuse it. Players need to have a combination of mechanical aim/shoot skills combined with tactical insight at an incredibly high tempo. The difference between life or death in any of these games rests in a fraction of a second combined with an awareness of what is happening around the entire map. Esports are sports that are just as demanding mentally and physically as any other.

You don’t have to watch the entire video of the Dreamhack finale below but it can’t hurt to watch a couple of matches with the commentary (The walls are transparent for spectators. They aren’t for players.):

The culture around this particular game is its own and somewhat different from people who for instance play SC2 or MOBAs. Attending this tournament was a lot of fun and I got to see some high level play as well as a demonstration of case modding by a company with its own branded energy drink. 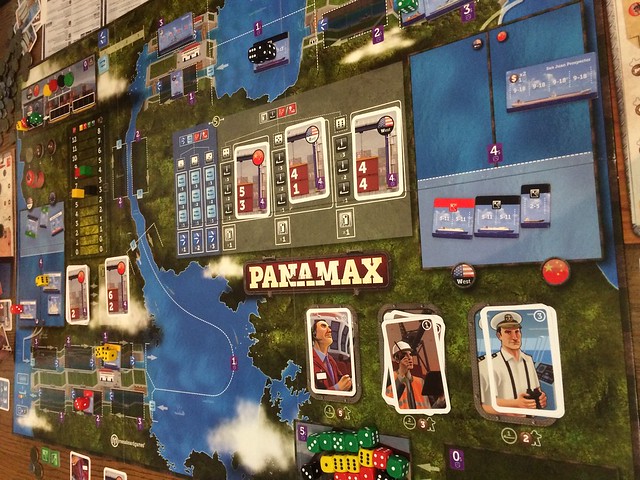 This week I got to play the board game Panamax at a game night here in Berlin. Though it is slightly complicated I was struck by how good an adaptation of container shipping this game is.

The game is about getting contracts to move your cargo from one side of the canal to the other using either your own ships or the ships of other companies. The core mechanic of the game is the fact that canal locks can only contain 4 units of ships and if there is a ship behind you that won’t fit, it will push you out when it moves. This will cost the pushing ship a movement action but it will not cost the ship that is being pushed.

The cost of a share is paid to the company in effect raising capital and the price of the stock is increased by one. At the end of each turn a company pays out dividends to all players who own a share in it if it can pay out to all of them. If the company does not have enough money to pay out dividends, nobody gets anything and the company share price drops by two. Shares are liquidated at the end of the game at their current vue to add to the capital of players (which are victory points).

This way of interweaving player interests with each other is incredibly interesting and has been executed really elegantly compared to the complexity it adds to the gameplay. Besides combining destinies using the shares, you can also load your cargo on somebody else’s ship. This way figuring out which actions benefit whom exactly quickly becomes intractable.

What’s also funny is that cargo that is stuck in the canal incurs costs at the end of each turn. If a company cannot pay all of these costs from its own capital, it will get it from the player managing it. This means that companies are not limited liability or that managing directors are fined for mismanagement both of which are interesting.

All in all Panamax is a very successful eurogame that actually fits fairly nicely with its theme. At each step it feels like you are taking important decisions for the company you manage.