Berlin is rebuilding the Maaßenstraße into the first Begegnungszone (‘Encounter Zone’) of its kind in the city. Works are underway now after a public consultation was finished last year or the year before. I looked around a bit but I couldn’t find the plans for what they are actually building there. A quick e-mail to the senate solved that problem and I got a PDF of the plan. 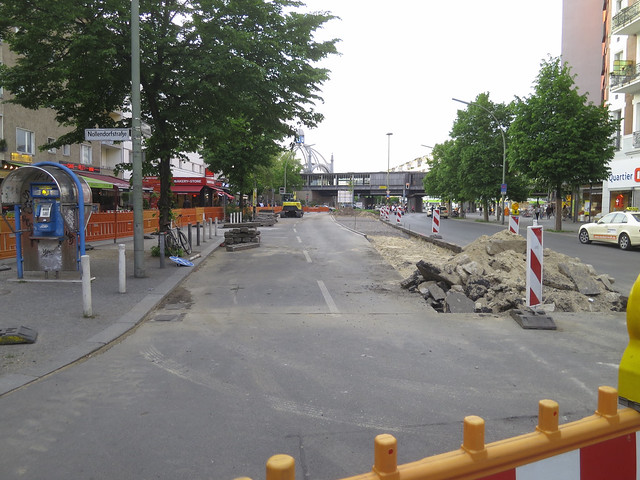 The most important bit of that plan is the layout of the new street which is dramatically different from what we have right now. Maaßenstraße is a street in Berlin saturated with cafes and restaurants where people from far West Berlin will go to go out on weekend nights. It also touches on Motzstraße which is a popular gay going out area and there are tons more bars and restaurants littered about. On Saturdays the market on Winterfeldtplatz is brimful of people and blocks most of the traffic on the South side.

The quantity of establishment is deceiving since the gastronomy on Maaßenstraße is of such a low quality that I wouldn’t regularly visit any of the places there except the two Turkish kebab places Hasir and the Keb’up House (for the late night döner box).

Traffic wise there used to be bike paths on the pavement but because of the heavy use by pedestrians and the fact that the bike path was level with the walking area, these caused dangerous situations. The road itself wasn’t a great alternative as it was used mostly for parking, double parking and the ostentatious display of muscle cars at night. All in all the usage of the street was thoroughly out of whack with how space was distributed between the various groups.

The new plan removes parking altogether which may or may not work depending on the enforcement level. Cars can park anywhere they want in Berlin and receive a fine that is so low nobody really cares about it. Cycling and driving are integrated on the remaining piece of road that is a lot more narrow than it was and lots of space is allotted to pedestrians walking and hanging out on the street. I have no idea what that is going to do to the noise levels in the street but I don’t live on a popular party street for a reason.

I’ve annotated what I think is noteworthy about the plan below (in a 13MB image file, click for big). All in all the plan looks solid and is bolder than I could have hoped for. It remains to be seen how it will be received by drivers and whether the police enforces the zones that are on there with vigour.