Kevin posted yesterday that he had an extra ticket for Max Richter’s Sleep at Kraftwerk Berlin yesterday. Without a moment’s hesitation I packed my sleeping bag and cycled there with him.

Kraftwerk Mitte is a disused power plant in the middle (Mitte) of the city that is now a club venue and host to a variety of events. The most striking features of it are large open spaces and lots of exposed concrete everywhere.

Max Richter I didn’t know before but I quickly confirmed that I would agree with his music. It had been one of my desires to attend a classical music concert while lying down being able to doze in and out of sleep as your mind and body dictate. Classical concerts tend to be long and uncomfortable affairs.

I hadn’t imagined I would get the chance to do this during an 8 hour overnight concert. 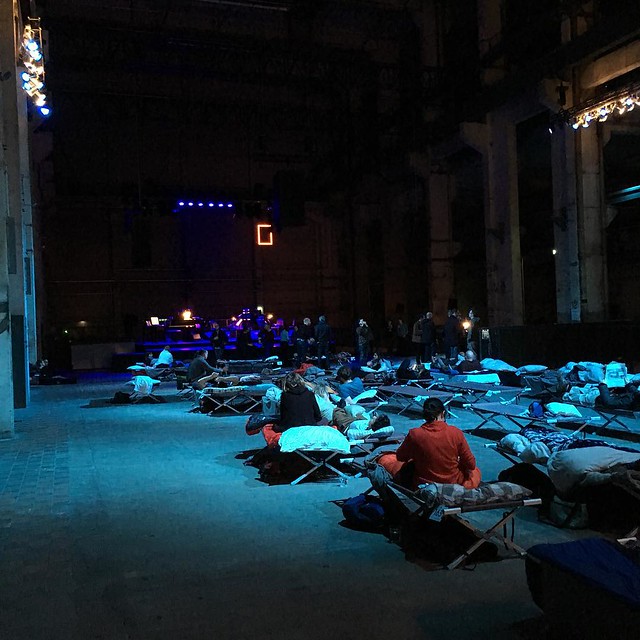 The music is very smooth to listen to and it is a kind of music that Richter is known for (read this interview). I’m listening to From Sleep now as I write this. I listened to the first couple of hours and then fell into a fitful sleep until I woke up again at 07:30 to catch the end.

Sleeping on stretcher beds at a power station 15 minutes cycling away from home with a couple of hundred other people was a strange experience. It was for one one of the lowest key camping trips I have ever undertaken. Though I’m used to the occasional communal sleeping arrangement, those are totally different situations. Berlin’s club spaces facilitate experiences in between the intimate and transgressive but even then this is an odd one out.

I probably also wasn’t the only person in the room who considered it wry that we would pay €48 to sleep in circumstances similar to thousands of others in Germany right now.

I’m still not sure what to make of the event but it is a memorable experience that will stay with me for a while like a dream but more powerful.

I’m still waiting for the pictures of Friday to air on the IxDA Flickr and for the video of my talk to be posted, but here are some notes I found around the web about my talk (for my personal notebook).

Today Alper Çuğun will lead a session about ‘Conversations are the new interfaces’ and Marcel Schouwenaar will talk about ‘Trade-offs & Sharing’. —Embassy of the Netherlands in Finland

Alper Çuğun (@alper), who used to co-run a gaming company called Hubbub, talked about conversational interfaces. I’ve been really interested in these lately so I found it very helpful. He showed an example of a conversational UI that they developed and gave a rundown of do’s and dont’s when designing for them. One interesting insight was that they found that kids will read a lot of text if they get it in SMS-sized chunks. He smartly called conversational UIs the “UI for AI” and cautioned that they are not perfect for every use case. —Aaron Ganci

Another fantastic talk was from Alper Çuğun. He gave an overview of conversational user interfaces. It was based on his own experience making mobile games that use conversations and messaging as the main mechanic. He also shared an analysis of the tools out there to make conversational UIs and a prediction of where the scene is heading.

In particular, I was struck by how conversations, like the messaging apps we’re all familiar with on our phones, can lower the barrier to people using technology. It now feels very natural to text back and forth with friends. When machines can text with us, that might give us a sense of accessibility and agency in our interaction with them. — Michelle Thorne

I just got back from Interaction in Helsinki having given my talk about how Conversations are the New Interfaces.

I have been blown away by the response to and kind words about my talk. I think this is a conversation (!) worth continuing. Stay tuned for details on that.

Here now is a collection of photos I found of my talk (for my personal archive):

Conversational UI: the Rise of the Chatbot! My prediction for the next Star Wars title? @alper #ixd16 pic.twitter.com/IyTeI0GI4a

Any startup with “chat” in it is gonna get funded right now. When will we reach “Peak Chat”? @alper #startups #ixd16 pic.twitter.com/rntO9PcioV

Great to see @alper talk about conversational interfaces and games about difficult choices at #Ixd16 pic.twitter.com/0OrO8koOnC